Don't forget that camDown FREE is the solution for securing your webcam from cyber criminals and pedophiles and that's no lie!

GRAMMY- nominated, DOVE Award-winning, and platinum-selling group Newsboys is back with new music for the first time in over 2 years. As they ready for the October 1st release of STAND, the band took to social media this week to unveil the album’s tracklisting. You can learn more about the heart behind each song with a play-by-play from the band below. You can pre-order/pre-save STAND here.

Twenty-twenty left us with a choice. In the midst of safer-at-home orders, racial and political unrest, and a virus that wreaked havoc around the world, the question remained: Where do you stand? For Platinum group Newsboys, the answer was easy. Recognizing that their season of collaboration with former bandmates Peter Furler and Phil Joel for their nostalgic run as Newsboys UNITED was coming to a close, current band members Michael Tait, Duncan Phillips, Jeff Frankenstein and Jody Davis, began to assemble an album that gave no doubt as to who they are and what they believe. The result is STAND, one of the most thoughtfully-crafted releases of their career and a project that marks the band’s return to their original label home, Capitol CMG.

1. Magnetic
“Coming out of COVID, we wanted to lead with a happy, fun, summertime song. But it still has a message, which is important. We were sitting in the studio one day; and once you get together, you never know what’s going to come out. And we just started talking about Maroon 5 and how I love their grooves. When the chorus hit, we knew it was special. The song is about the relentless chase God has for His creation. He loves you so much that He lets you assert your free will. He puts it all out there
and says, ‘What are you going to choose?’ But at the same time, He will pull you back into Himself. You can’t escape at the end of the day.” —Michael Tait

2. Ain’t It Like Jesus
“I grew up on a lot of reggae music. I like reggae. And it’s not a reggae song, but it definitely has reggae influences. The concept of the song is that God will do the unexpected. It talks about our Dad, our Father in heaven, our Papa. He is the kind of God that will change water into wine. It’s like Him to shift the paradigm. Ain’t it like Him to do the unexpected? It’s like Him to take every situation that Satan meant for bad and flip it, and that’s the beauty of the God we serve.” —Michael Tait 4. Stand
“We tried to write a song that speaks to the very purpose and mission of every human. We finished the song and were like ‘This feels like an album theme.’ And especially nowadays in the face of so much hate. I mean, lets face it, I’m a man of color, and people are trying to tell me black and white can’t get along; we don’t like each other. When people ask you, ‘Where do you stand? Tell me the hope that lies within you,’ believers in Christ should stand. The Bible says God would rather you be cold or hot, not lukewarm. You’re not standing if you’re standing in the middle. You have to choose a side. If you’re going to be a bad boy, be a bad boy. If you’re going to be a God follower, then be a Jesus freak, do it.” —Michael Tait

5. Clean
“This song is a real man’s struggle with the thought of how people perceive you—how they may pass judgment on you—and how you want to be perceived. The verses are pretty direct. I can’t be your god. I can’t be your savior. I’m commanded to love you, but I’m also fallible. I’m not clean. I’m unclean, at best. Even my best is still filthy rags. So it says, ‘Here’s what I’m not. Here’s what I want to be, and here’s what I’m striving to be.’” —Michael Tait

6. Won’t Be Afraid
“God tells us in the Word a million times, ‘Do not fear.’ Fear’s a weird thing because fear can paralyze you. Fear can rob you of years of peace and joy. Fear can keep you from living, truly living. So ‘Won’t Be Afraid’ is an anthem, I think; another song just to say, ‘Hey, you either believe this thing or you don’t.’ This God we serve is real. He’s the real deal. There’s nothing to fear but fear itself.” —Michael Tait
“God’s not the author of fear. The other guy is. So I think at the end of the day, a song like that says to me that if we ever experience fear, and we absolutely can, to know that that’s not coming from our Maker. It’s coming from somewhere else. That’s empowering because then you can turn around and start walking the other way.” —Duncan Phillips

7. Blessings On Blessings
“We’ve all got stuff we can whine about. Every one of us. It doesn’t matter how blessed we are, we’ve all got something we could complain about, especially after this past year. But I think we have to make that conscious decision. When we wake up, every day we have the opportunity to be grumpy or to be happy. And if you choose happiness and you choose light, that’s where that gratefulness, that thankfulness starts oozing up, and its like, Today’s a great day. It’s gonna be awesome!” —Duncan Phillips
“Count your blessings. The joy of the Lord is your strength. It’s a blessing to be alive and breathing. Find the little blessings in every little thing—a kid’s smile, a sunny day, whatever.” —Michael Tait

8. Come Through
“I kind of indulged a bit on the style, because I’m a big fan of Coldplay. I’m a big fan of English arena rock, if you will. This song is, lyrically, kind of like a cousin to ‘Ain’t It Like Jesus,’ because I’ve never seen God not come through in my life. I think about all the times I was in a pickle or something happened, and I go, You know what, God, You were there. Sometimes I was just too busy or too in my mode, in my zone, to even recognize the blessing that He had for me in that moment. I look back, and I’ve got to admit that God came through every single time.” —Michael Tait 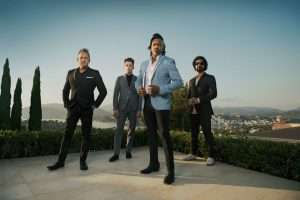 9. No Doubt
“This is probably the best example of Newsboys’ quirky pop. Literally, the song talks about how Jesus is the only One. Why would I settle for counterfeit? A guy in a car pulls up to a light in a Chrysler 300. Everything’s going great until he sees a Bentley pull-up. It’s like, I have the best. There’s no doubt about it. God puts us in the Bentley of life, so to speak.” —Michael Tait

10. “Never Too Far Away
“That song was written about three years ago. The second verse is about my brother. He’s been in jail most of his life. The lyric goes, ‘It’s hard to believe you’re forgiven, free from mistakes that built the walls in your heart like a prison.’ For every believer, and even for non-believers, it’s hard to believe that we’ve been forgiven for that 80th time of sinning. It’s hard to believe that God’s going, ‘OK, this is a pattern. It’s gone on for years. When are you going to change? But yes, you’re forgiven.’ Paul killed Christians for a living. He could’ve been a part of ISIS. The guy was a murderer, but God changed him. That’s beauty about who our God is. It’s easy to forget what God has done and can do when you’re under pressure. Well, you know what, if you chill out and relax, that same God will get you out of that mess you got yourself into. You’re never too far away from the arms of God. You’re never too far to be rescued. Stop where you are, turn—God’sright there.” —Michael Tait
“I think the biggest lie that we believe is that we’re too far gone; there’s no way God could take us back, that we’re doomed. You hear people talk like that sometimes, like, ‘God, there’s no hope for me. I’ve done too many bad things.’ Have you murdered people recently? Have you done the worst of the worst things recently? You probably haven’t. So yes, there’s always hope for you. There’s always a chance for you. God is always looking for an opportunity to forgive you and wrap His arms around you.” —Duncan Phillips